Michael Korrel knew from an early age: he wanted to become Judoka. He was only four years old when he first went to a judo class with his sister. From the moment he entered the judo mat, he was unstoppable.

When he was six years old, when he often won in the weekend competitions, it turned out that he had serious talent. At the age of twelve he was allowed to go to the Dutch Championship <15 years for the first time. Then things got serious for Michael. When he was fourteen, he sat with garbage bags wrapped around his body on the exercise bike to get under a certain weight (an old school way to lose weight). Michael was dedicaded and then won the Dutch Open. That year he had a great chance at the Dutch Championship, but he finished third. This felt like the end of the world to him, but he quickly resumed his drive.

"The progression in his career is clearly visible."

Michael entered a higher age category and was allowed to participate in more and more (foreign) tournaments. At the age of eighteen he won the Dutch Open and became Dutch Champion for the first time in the age category -20 years. Then a new phase in his career began. The judo federation saw more and more potential in him and invested in his training and international tournaments. A special moment was the letter that he was selected for the national team. Michael's goal was clear: to win the Junior World Championship. To be admitted here, he had to earn a medal in the previous qualifications. This succeeded during the very last tournament for the World Cup. He finished fifth at the World Junior Championships, but was named the best male judoka. To surpass this, he also won his first European junior medal in 2012. 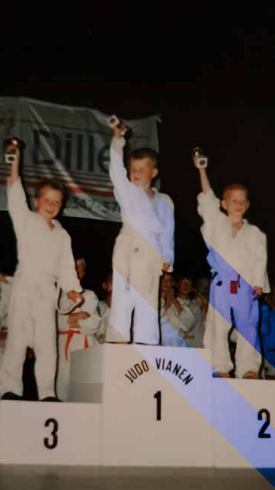 His junior career was accompanied by ups and downs, but Michael's progress as a human and judoka was clearly visible. At the age of eighteen, Michael passed on to the seniors. At his first NK in the senior category, Michael had to compete against the current champion in the category. He defeated it by 'throwing' it three times and became an Dutch Champion in the seniors as an eighteen-year-old. The progression in his career was then clearly visible.

Michael not only invested in his training, but was constantly on the lookout

to the right formula for his success. ”

Many years later many medals and achievements followed. 2017 was a very successful year for Michael. He won six medals out of eleven tournaments and finished fifth in the European and World Championships for seniors. Michael not only invested in his training, but was constantly looking for the right formula for his success. Which food gave him the best result, the right amount of water he had to drink, the number of hours of sleep he needed and so on. Evaluate his performance and learn from it. His goal is to get the most out of himself and to learn from setbacks. Be critical of the good and bad moments. His motto is therefore: "I never lose. Either I win, or I learn. ''

Michael symbolizes control. He has the discipline to keep a tight schedule and to leave things for his career. His progress is paramount. Michael is not guided by emotion when it comes to judo, but makes responsible decisions and makes decisions. He is committed to the sport and determined to achieve his goal.